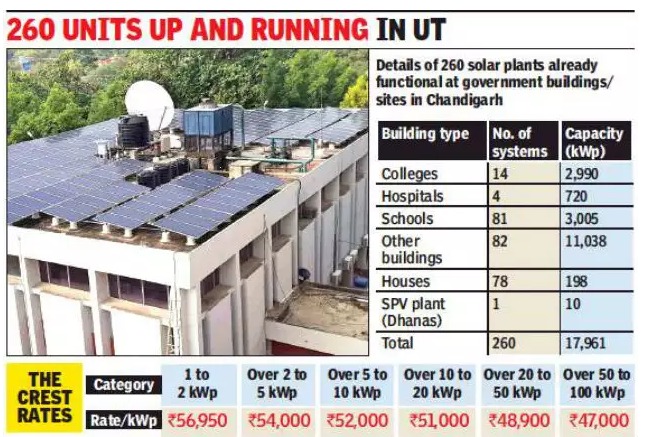 In early 2018, it was announced with a lot of media visibilty, that UT of Chandigarh would go solar and all residents having plot area more than 500 sq. yds, would have to install a solar rooftop plant by June 2018. The provision was already existing in Haryana, and all new residential buildings had to comply with the same. Compliance, as per experience has been weak. Even cities like Gurugram, where there is no dearth of wealth, has not seen a lot of uptake, though in the very recent past, a take off of sorts is happenning.
Fast Forward to 2019, and it is now noted that the Chandigarh administration has extended its deadline for mandatory installations of solar rooftop (SRT) systems to June 30, 2019 — second such extension since 2018, when it was first announced. This is now updated and its seems there is a new deadline of September 2019. This is the third extension provided by the administration.
All new establishments (residential and non-residential) with an available area of more than 500 square yards to adopt SRT. Old buildings were mandated to adopt it within two years of issuing the order.
Why should consumers go solar ?
A clear benefit that accrues to an average household

installing a 5 KW solar rooftop plant is the reduction in energy bills. For an average household paying around Rs. 9000-10,000 per month, it is expected that the average bill can come down to about Rs. 1000-1500 per month in such a scenario and with similar consumption. This is a massive 80-90% savings over current as-is scenario.

As power demand increases, if part of the load shifts to renewables, and each household starts to produce and generate some of its own power, it is expected that peak load will reduce. De-centralised power generation is the future, and can pave the way for some households to go off the grid, if they have enough battery back up to complement the solar rooftop plants.
Thirdly, it can lead to reduced pollution in the City Beautiful that Chandigarh is. In the recent few years, with increased vehicular traffic, and development, the city has been witnessing higher pollution levels, and this could be the residents’ giveback to the city. 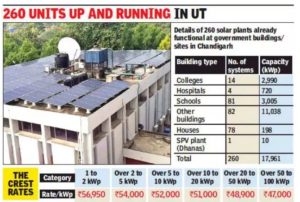 Chandigarh can be a model city of sorts, and have a higher than national average of solar rooftop capacity. It is expected that with increasing uptake a few cities can show the way for the rest of the country.  Its seems that there are close to 260 solar rooftop units that are running in the city. The overall market, for residential alone is over 10000 residential  solar units across different sectors. The national target is to go solar and install 175 GW  of renewable energy installations by 2022,  of which 40 GW is the component for grid-connected solar rooftop. A pertinent point to note is the abysmal growth in installed capacity of solar rooftop that is currently at less than 2 GW, and is far below expectations.
Chandigarh can change all that. It will be a test case, and upto the creativity of the city administration and their policies, implementation and execution, and monitoring that can help the city achieve the tag of a solar city. History points to the fact that earlier policies on going solar in Chandigarh have failed and the targets set have not been achieved. But that was another era, where the costs of going solar were high, and economic rationale was at best suspect. Today, the situation is very different, and any household installing a solar rooftop plant, can realise immediate financial savings.
What can the administration do ?
The administration must provide visibility to the fact that currently there is a 30% subsidy on going solar. The administering of this subsidy must be smooth and frictionless, and very efficient. Most house holds will take up the net metering option that allows excess power to be banked with the electricity utility company. This process must be transparent, and efficient with correct recording of bills and exported units.  Currently, the policy allows that the bills are settled bi-annually, based on the net metering system, and while no money back is paid back to consumers they are adjusted in next bills. It is advisable for residents to correctly assess their power load and install the plant keeping in mind that they can either produce just enough or maybe slightly lower than expected consumption. As an organisation, Urja Unlimited can help here, and avail of the site survey option or write in to the helpline to correctly size a rooftop solar plant in Chandigarh or around. The administration can also provide a ready tool ( preferably online) for the same.
It must be mandated for banks and FIs to provide financing for going solar. This is a key initiative and rooftop aggregators like Urja Unlimited are already taking steps in this direction with the help of other market players. Long term financing contracts for 4-5 years are available with such companies that can help reduce the burden on consumers when they decide to go solar. The savings can pay for the EMIs to be paid for repaying loans, or a PPA arrangement can be structured that takes care of upkeep of the plant as well.
It is prayed and hoped that enough positivity goes around, and success stories will motivate and help consumers to decide on installing solar rooftops, small or large does not matter. Every single resident must be touched and sold the idea of going solar, as it eventually helps them reduce their energy bills as well as CO2 emissions.